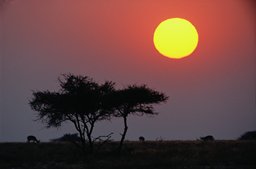 Many investors who have never traveled in Africa probably have preconceived ideas about it, perhaps as a land of safaris and political strife, rich in coveted natural resources that have failed to bring widespread wealth and development to the continent. Many also might not realize how diverse the landscape, the economies and the people are on the continent, which boasts more than 1,000 languages spoken in more than 50 countries and climates ranging from hot deserts and tropical rainforests to frozen glaciers. Recognized by science as the birthplace of humankind and aptly dubbed the “cradle of civilization,” Africa has been experiencing a new type of evolution in recent decades. Michael Hasenstab, chief investment officer, Global Bonds, Franklin Templeton Fixed Income Group®, has been traveling in Africa and is excited about the changes and innovations taking place there. Hasenstab believes investors would be remiss to ignore Africa’s growing influence in the world, and the potential investment opportunities there.

As we travel the globe in search of potential opportunities, the Franklin Templeton Fixed Income Group has become interested in Africa. I think the world needs to pay more attention to the development, both political and economic, in Africa. During our time visiting and conducting research there we have seen a degree of political stability developing in many African countries that we haven’t seen in decades, and that has unleashed positive change and development that we think has allowed the private sector to blossom. We are particularly excited about developments taking place in the economies within sub-Saharan Africa, the region south of the Sahara Desert. Many of these countries are rich in natural resources and human capital, and both are areas where we see great potential.

As we seek out investment opportunities, we think its key to recognize the growing importance of Africa’s influence on the world. It is growing, both in terms of potential opportunities and risks. In many African countries, over 70% of the population is below the age of 35. That youthful demographic can be quite positive in terms of the potential for growth on the continent, in contrast to aging populations in places like Japan, the United States or Europe, where fewer young workers plus a large aging population could lead to increased use of social services and a drag on potential growth. However, a youthful population offers its own set of challenges, namely employment for all of those eager workers. If governments can’t deliver on their ability to improve the lives of all of their people, there is a risk of incredible social instability.

In Africa, the ongoing domestic threat of instability can become global. So Africa is important not only based on what’s happening within these countries, but from a global perspective. We’ve seen improvements in political stability across many parts of the region unleash a tremendous amount of innovation and investment that we believe can tap the natural wealth potential that exists in Africa. I think the world has a vested interest in making sure this transition works; that people’s welfare continues to improve so that social stability can be maintained—not just for the benefit of each country, but for the entire global system.

We are most excited about countries that have not only gone through a political transformation but where stability seems to have been cemented beyond just one government regime. If successive governments can follow each other with some degree of economic continuity, it can allow for greater domestic and international investment. There’s no question about Africa’s wealth potential in terms of natural resources and human capital. The question is really about harnessing that wealth potential through better governance. In my view, countries with better governance can tap into that wealth potential and really can improve the lives of the people—and be important contributors to broader global growth. We should also learn the lessons of places that don’t have a steady state or good governance. It can create consequences.

Aside from good governance, an important but missing element in many parts of sub-Saharan Africa in particular is infrastructure. A lack of infrastructure is a notable constraint. Given some degree of political stability in Africa—if roads can be built, if power lines can be built, and if energy can be delivered to a broader part of the population—the potential is tremendous. With government commitment and a cooperative relationship with the private sector, we think investment in infrastructure could vastly improve the welfare of the people throughout Africa.

The leapfrogging of technological innovations has fueled the private sector in Africa. One example is in mobile banking. You can’t put a cash machine on every corner in Africa, but mobile banking has opened up convenient and widespread access to the entire economy and formalized cash transactions. Another example is microfinance. A vendor at a local market might obtain $20 from the bank, and by the end of the day, when his or her goods were sold, the vendor would pay back what was earned not in the form of traditional interest, but on deposit. Perhaps the vendor would earn $2, and put that $2 back on deposit, then start again the next day and repeat the process.

Another exciting application of these financial innovations is in utilities, where one of the challenges had been creating a reliable payment system. Utility companies aren’t going to operate unless they are guaranteed payment. Mobile banking can facilitate prepayment of utilities, and thus potentially facilitate development of the utility sector, which could encourage broader infrastructure investment. This type of innovation isn’t just in one sector, but really crosses the entire economy and the entire continent. Witnessing how the evolution of the private sector is beginning to release the natural wealth potential of Africa is quite exciting to us. We see that the degree of political stability in Africa is allowing for reinvestment and innovation to take hold, whether it’s in mobile banking, microfinance or other areas. I think that’s exciting, not just in terms of investment opportunities, but in terms of the development of the African continent.

Michael Hasenstab’s comments, opinions and analyses are for informational purposes only and should not be considered individual investment advice or recommendations to invest in any security or to adopt any investment strategy. Because market and economic conditions are subject to rapid change, comments, opinions and analyses are rendered as of the date of the posting and may change without notice. The material is not intended as a complete analysis of every material fact regarding any country, region, market, industry, investment or strategy.