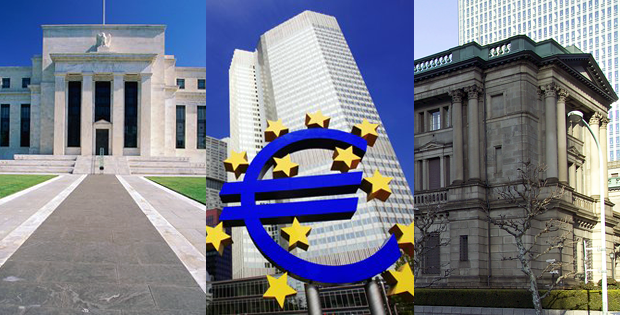 Speculation about likely major central bank monetary policy decisions is reaching fever pitch ahead of pivotal meetings on both sides of the Atlantic in consecutive weeks during December. As investors scour every uttering by monetary policy committee decision makers for clues, John Beck, portfolio manager and director of Fixed Income, London, Franklin Templeton Fixed Income Group, believes central banks need to look beyond economics. He finds some evidence of a growing awareness among certain central bankers of the unintended consequences of certain monetary policy approaches.

With monetary policy divergence between the developed world’s three most influential central banks—the US Federal Reserve (Fed), the European Central Bank (ECB) and the Bank of Japan—set to continue, it seems clear to us that the need for a decisive approach extends beyond a simple economic argument.

Despite some expectation of action at recent monetary policy meetings, both the Fed and the ECB chose to stick with the status quo, neither raising rates in the case of the Fed, nor extending the quantitative easing programme (QE) in the case of the ECB. Nevertheless, both dropped significant hints that action is imminent.

We are now concerned that the authorities steering these central bank decisions need to get to grips with these signalling issues that may have opposite economic consequences to those that the policies in place are designed to bring about.

For the Fed, we think there are both objective and subjective—in economists’ terms “positive” and “normative”—reasons for raising interest rates, and we think it’s possible the decision not to raise rates at either the September or October Federal Open Market Committee (FOMC) meetings may have set back the Fed’s case.

By appearing to backtrack, the FOMC may have prompted concern among both investors and consumers, and these individuals may be more cautious in their spending as a result. We have already seen that US consumer spending growth in September was the slowest since January 2015.1

In both the eurozone and the United States, investors are looking for certainty. We think investors across the globe are looking for some confidence that this recent period of market volatility tied to uncertainty is finite. At the moment, I don’t think anyone really sees that.

We think signalling from central banks has an important role to play in helping to bring clarity. In our view, the Fed could have sent a positive signal by confirming a rate increase, even if the conditions were not entirely perfect, to underscore that the economy is on an improving path and no longer reliant on extraordinary measures.

We would argue that from an objective point of view, macroeconomic data are still at a level at which the Fed should begin to remove extraordinary monetary measures.

The United States is in a fairly consistent positive growth phase of monthly payroll numbers, and unemployment, at 5%2, is significantly below that seen during the financial crisis seven years ago.

It’s true that the September payroll figures were disappointing, and there remain some concerns about the impact on the US economy of the Asian slowdown.

However, we would argue that the normative imperatives are pointing to a similar conclusion—it’s time for a US interest rate increase.

Signalling is equally important on the other side of the Atlantic. We feel the ECB needed to signal that the economic support of further QE was not only available, but was actually going to be deployed. At the most recent ECB meeting on October 22, ECB President Mario Draghi reiterated that he was ready to extend the QE programme. He signalled that the ECB intends to act at the next meeting on December 3.

More than that, however, we think central banks around the world need to take into account what economists call the “negative externalities,” in other words—the cost to third parties of monetary policy. The rise in support for non-traditional political parties seems to us to be one example of the consequences of those costs.

And we are starting to see evidence that the central banks do recognise that there can be collateral damage from their approaches.

A report from The Bank of England in July 2012 concluded that while most people in the United Kingdom would have been worse off without QE, those who had benefitted most were those with assets. The report concluded that those without assets—or those with only cash assets—saw very little benefit.

Equally, in a speech to the Conference on Economic Opportunity and Inequality in 2014 hosted by the Reserve Bank of Boston, Fed Chair Janet Yellen raised questions on some of the negative externalities of a continuation of the accommodative policy.

Yellen acknowledged that distribution of income and wealth in the United States has been widening more or less steadily for several decades, and she noted that asset owners—those that have benefitted most from QE—tended to be able to afford better educational outcomes for their children. There tends to be a causality between better educational outcome and better job employment prospects and, hence, social mobility.

At its October meeting, the Fed did not explain its decision to leave rates unchanged; however, one of the reasons cited for not raising rates at its September FOMC meeting was the state of the global economy. Weakness in emerging markets, certain Asian countries and commodity-driven economies along with Latin American and Asian currencies being under pressure were cited. And yet at the same time, the Organisation for Economic Cooperation and Development (OECD) has been arguing on behalf of many of those economies for the Fed to go ahead and raise interest rates to remove the uncertainty.3

Our feeling is many of these currencies have been unnecessarily penalised by uncertainty caused by fears the world is in a much weaker place economically than it really is.

We believe evidence will start to emerge that China is not collapsing but is stabilising at a more sustainable growth rate, and therefore we think that many of those economies that are currently under the microscope are likely to start to recover.

Therefore, in our view, a more certain monetary policy environment from a global perspective would more likely encourage global growth than discourage it. And, we think that makes taking a more decisive approach the right thing to do.

John Beck’s comments, opinions and analyses are for informational purposes only and should not be considered individual investment advice or recommendations to invest in any security or to adopt any investment strategy. Because market and economic conditions are subject to rapid change, comments, opinions and analyses are rendered as of the date of the posting and may change without notice. The material is not intended as a complete analysis of every material fact regarding any country, region, market, industry, investment or strategy.

All investments involve risk, including possible loss of principal. The value of investments can go down as well as up, and investors may not get back the full amount invested.