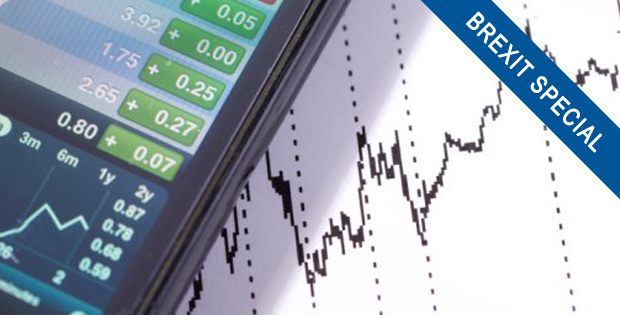 Franklin Templeton’s Notes from the Trading Desk offers a weekly overview of what our professional traders and analysts are watching in the markets. The European desk is manned by eight professionals based in Edinburgh, Scotland, with an average of 15 years of experience whose job it is to monitor the markets around the world. Their views are theirs alone and are not intended to be construed as investment advice.

In a result that confounded bookmakers’ odds, the United Kingdom voted to leave the European Union (EU) on Thursday (June 23) by 52% to 48%, with a high voter turnout of 71%. The leave campaign won the majority of votes in England and Wales, while London and every Scottish region saw remain majorities. In reality, it was the scale of the vote for leave across England that swung the vote where many traditional Labour voters backed a leave.

On the back of this result, UK Prime Minister David Cameron resigned this morning and will stand down once the Conservative Party appoints a new leader—a process that is likely to take around three months.

Predictably, European equity markets opened significantly lower on a huge volume, but markets quickly recovered a little ground. The financial sector—banks and insurers—led markets lower while support for health care and staples seemed to reflect a flight to safety.

That said, it is important to look at these moves in the context of what has happened over the week. Markets had climbed sharply ahead of this vote on the expectation of a remain outcome, so broader markets are essentially back at last week’s lows.

In currency markets, the sterling fell to lows not seen since 1985, trading as low as -11% against the US dollar, when the result first emerged. It has recovered somewhat since then. Meanwhile, traditional safe havens like the Japanese yen and Swiss franc surged higher. The Swiss National Bank (SNB) stated it has intervened to stabilise the Swiss franc. The euro also lost ground over fears of a “domino effect” as other European nations consider their future in the EU.

What’s Next? For the United Kingdom to begin the process of leaving the EU its government must trigger Article 50 of the Lisbon Treaty, launching a two-year negotiation period, which can be extended if parties agree. Brexit, therefore, is likely to be a drawn-out process.

It is worth noting that the Brexit vote is not legally binding, so there are a few ways it could theoretically be blocked or overturned. However, we think it extremely unlikely that a government would go against the will of the majority of voters.

We think one difficulty for UK negotiators is that EU leaders may not be in a forgiving mood after a British vote to leave. Many European countries have domestic Eurosceptic movements of their own, and European leaders may be worried that a successful British exit could embolden them. So the EU may refuse to give the United Kingdom a favourable deal as a warning to other countries thinking about exiting the EU.

If the UK—the fifth-largest economy in the world—doesn’t want to remain in the EU, can we expect other member states to start asking questions about their continued membership? People are likely to question whether the EU will be able to continue to exist in its current form.” David Zahn, 24 June 2016.

A number of global banks sought to calm fears as soon as the result emerged, while the European Central Bank was notably absent from central bank rhetoric.

In The Know: The UK Votes to Leave the EU

On Thursday, June 23, 2016, UK voters confounded expectations and the dire warnings of many politicians, business leaders and international non-governmental economic organisations by choosing to leave the European Union. Here, David Zahn, head of European Fixed Income, Franklin Templeton Fixed Income Group, shares his initial thoughts on how markets may respond, and the challenges and potential opportunities he sees ahead. Read More.

Zahn says that anyone hoping that the result of the vote to remain in or leave the European Union will bring an end to the uncertainty and volatility is likely to be disappointed. Here, he explains why he believes the political fallout of this vote will likely continue to influence investment markets for months or possibly years, and not just in the United Kingdom but across Europe. Read More.

On Brexit, Banks and Bargains

Will they stay or will they go? UK voters will answer that question on June 23 when they decide whether their country will retain its membership in the European Union or strike out on its own. Philippe Brugere-Trelat, portfolio manager, Franklin Mutual Series, offers his opinion on whether “Brexit” will come to pass and its potential effects on UK companies. He also provides an overview of economic conditions elsewhere in Europe, with a focus on the region’s beleaguered banks. Read More.

This article reflects the analysis and opinions of Franklin Templeton’s European Trading Desk as of June 24, 2016, and may vary from the analysis and opinions of other investment teams, platforms, portfolio managers or strategies at Franklin Templeton Investments. Because market and economic conditions are often subject to rapid change, the analysis and opinions provided may change without notice. An assessment of a particular country, market, region, security, investment or strategy is not intended as an investment recommendation, nor does it constitute investment advice. Statements of fact are from sources considered reliable, but no representation or warranty is made as to their completeness or accuracy. This article does not provide a complete analysis of every material fact regarding any country, region, market, industry or security.