The coronavirus pandemic could shape how UK businesses think about dividends going forward, says Franklin Templeton UK Equity’s Colin Morton. He shares his on-the-ground thoughts on the UK economy, and how it measures up against the last global economic shock.

As investors continue to navigate through the unprecedented global health crisis we have experienced this year, we’ve seen governments and central banks worldwide deliver extraordinary policy responses. These include large reductions in interest rates and substantial quantitative easing (QE) programmes, which have supported the bond market.

In the short term, we are currently considering what the exit strategies for these policies are—we’ve seen a few encouraging signs from the easing of lockdowns across some European economies. The United Kingdom is a few weeks behind other European economies in terms of a phased-in economic re-opening. For example, non-essential shops re-opened on 15 June after a three-month closure. The concern is whether we’ll see a resurgence in infection rates as people start going back to some level of normal activity.

Concerns hang over the foundation of some of these government or central bank policy responses. For example, the United Kingdom enacted a job retention scheme, which allows employers to furlough workers on 80% of their salary. The furlough scheme has undoubtedly protected a large amount of jobs in the country.

Many think tanks estimate that one in three people in the United Kingdom are currently furloughed. Questions remain what will happen when companies have to start funding payroll themselves after the furlough scheme winds down between August and October of this year. It may be that the UK government will have only temporarily saved the jobs companies were planning to let go.

The charts below show the course—and the speed—of unemployment claims in both the United States and the United Kingdom. Some investors might be numb to the word “unprecedented” at the moment, yet COVID-19 truly is an unparalleled global economic shock. We’ll be watching events in the United States closely as the economy gradually opens up.

Another aspect we’re monitoring closely in the United Kingdom is public sector borrowing. Over the last 10 years following the global financial crisis, annual net borrowing (i.e. budget deficit) to gross domestic product (GDP) ratio was reduced to about 2% of the economy. Given the UK policy response leading to more government borrowing and a potentially shrinking economy, we think the United Kingdom could reach as much as 15% net borrowing to GDP in 2020, clearly a huge increase as seen in the second chart below.

What’s counterintuitive is that we have a situation where government finances are in a worse situation than they were three months ago, yet they can borrow money at a cheaper rate, since those that are buying bonds are driving bond prices down. Despite the current financial situation, the UK government is able to take advantage of very low interest rates. 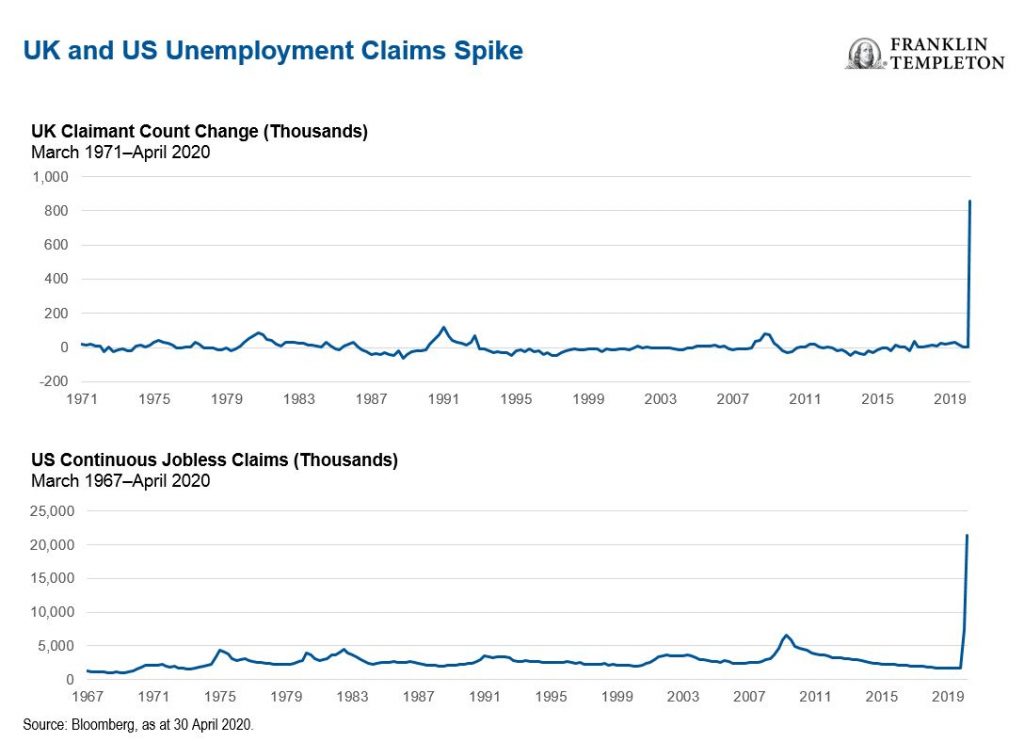 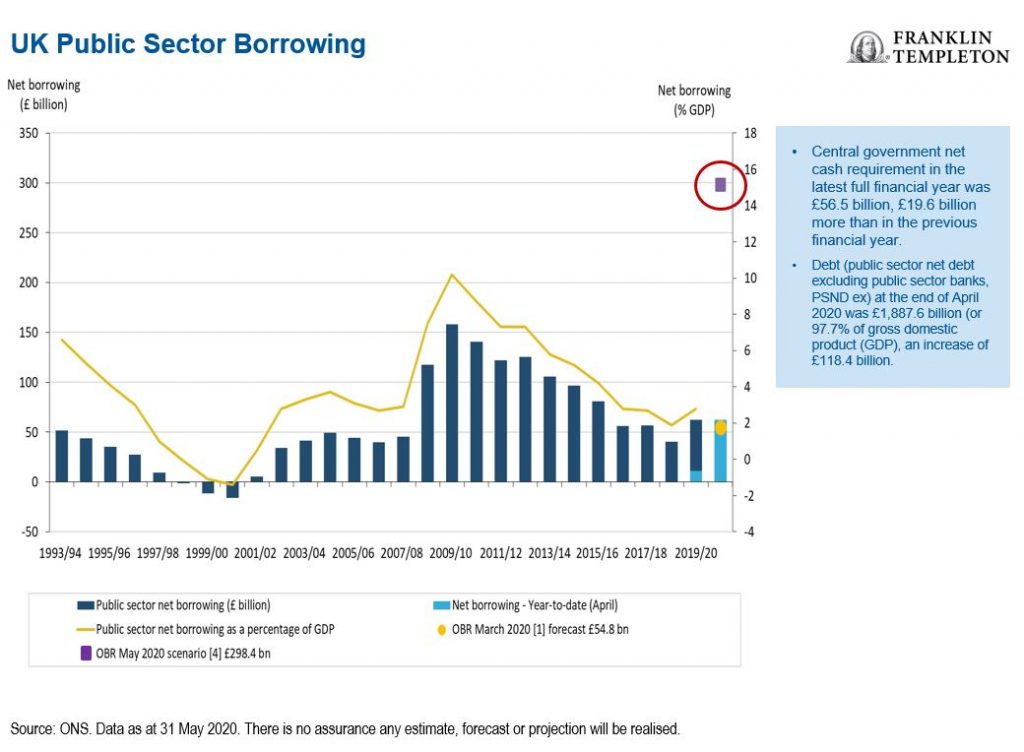 As we previously discussed in March, just when some companies were starting to forego dividend payments, we recognised some UK-listed companies, particularly those in consumer-facing sectors, have had to adjust their dividend policies in the wake of the pandemic.

While it’s hard to predict how long this crisis will continue to weigh on company balance sheets and dividends, it is becoming clearer that dividend policies are still up in the air for many UK-listed companies.

Against this backdrop, companies have split into three camps: those that have suspended, cut or cancelled dividends.

There are companies that have so far delayed dividend payments—they haven’t cancelled them, and they haven’t cut them. Some companies in industries where the virus generally hasn’t impacted as badly are hoping the outlook will improve over the next three to six months. And if they do, there’s a chance that they will pay the dividend that they’ve delayed. So, we may see some element of catch-up.

Meanwhile, other companies have completely cancelled dividend payments, and generally speaking, the pandemic has had a negative impact on companies dependent on consumers. It would be extremely difficult for them to pay dividends at this point in time. Companies that do not have much (if any) revenue at the moment, and have taken advantage of government schemes and cancelled dividends, probably won’t be paying them at all this year.

The Future for Dividends

Ultimately, we don’t think the pandemic will fundamentally break the concept of a steadily rising and consistent dividend story in the United Kingdom. What will likely happen is a refreshed approach—it will make businesses think differently about how they pay dividends.

Some people have argued in the past that companies with a model wherein earnings are very dependent on elements that are out of investors’ control i.e., oil prices, should have more of a payout ratio system rather than an absolute level of dividend. We’ve seen a gradual move towards this system from some oil businesses, for example, in the last three or four years. Some will pay between 40%-60% of their earnings out as a dividend, rather than committing to a progressive dividend policy.

For businesses where there might be a lot more cyclicality to their earnings, which is a lot more difficult to predict, perhaps we will see a similar type of dividend policy.

It largely depends whether businesses think a shock like we have seen with COVID-19  is something that could happen again or even regularly, which could encourage companies to run their businesses with stronger balance sheets going forward. Furthermore, companies which are more cyclical and consumer-dependent might want to make sure they have a stronger balance sheet and pay out less in terms of special dividends and curtail share buybacks going forward.

In a normal type of economic scenario, however, we think many companies with quality businesses and good long-term prospects should be able to keep growing their dividends, albeit from a lower base.

The views expressed are those of the investment manager and the comments, opinions and analyses are rendered as of publication date (or specific date in some cases) and may change without notice. The information provided in this material is not intended as a complete analysis of every material fact regarding any country, region or market.

Products, services and information may not be available in all jurisdictions and are offered outside the U.S. by other FT affiliates and/or their distributors as local laws and regulation permits. Please consult your own professional adviser or Franklin Templeton institutional contact for further information on availability of products and services in your jurisdiction.

All investments involve risk, including possible loss of principal. The value of investments can go down as well as up, and investors may not get back the full amount invested. Stock prices fluctuate, sometimes rapidly and dramatically, due to factors affecting individual companies, particular industries or sectors, or general market conditions. For stocks paying dividends, dividends are not guaranteed, and can increase, decrease or be totally eliminated without notice. Special risks are associated with foreign investing, including currency fluctuations, economic instability and political developments.